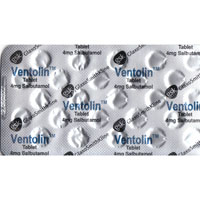 Albuterol (Albuterol Sulfate) belongs to selective beta-2 adrenoreceptor agonists. Unlike Clenbuterol, it produces a rather cleaner stimulant effect with less jittery and shaky side-effects, which is peculiar to Clen. In addition, it allows you to focus better on your work, which is quite hard with Clen. Besides, if we compare the two substances, the fat burning effects of Albuterol will be significantly better and a bit quicker.

The same thing we can see among steroids. The shorter acting versions typically produce more dramatic results than their long acting counterparts (e.g. Testosterone Propionate vs Cypionate). Medical studies show that Clenbuterol outperforms beta-2 agonists with longer half life (e.g. “Salmaterol”). So it’s logical to assume that Albuterol , a shorter acting beta-2 agonist than Clen, would likely to outperform it. Therefore, it’s also logical to say that Albuterol is going to be more anabolic than Clenbuterol.

If we want to understand how Albuterol works, then we need to examine Beta adrenergic system closely. The system consists of adrenoreceptors. The beta receptors (most known to bodybuilders) are located in outer phospholipid membrane of a cell. They react to such stimulants as ephedrine, Clenbuterol, etc. These beta receptors are further subdivided into three types: 1, 2, and 3.

The type 2 receptor is the most important in our case, because Albuterol doesn’t affect the type-1 receptor. Meanwhile the type-3 receptor is less relevant in humans than in other animals. There is also a type alpha receptor, which is irrelevant here, but needs a brief explanation.

Alpha receptors are more sensitive to significantly lower concentrations of catecholamines, than are the beta receptors. Catecholamines are organic substances that influence sympathetic nervous system. For instance, norepinephrine, dopamine and epinephrine belong to catecholamines.

In our case we are mostly concerned with beta-2 receptors, due to their stimulation by Albuterol . One should mention that by stimulating beta receptors, Clenbuterol, as well as Albuterol , causes vasodilatation – widening of blood vessels. Correspondingly it increases blood flow. They also stimulate the breakdown of fatty acids into the blood stream, which causes fat burning effect.

Increased blood flow comes along with an increased heart rate which leads to increased body temperature. This explains why some people taking beta-2 receptor stimulants feel a bit hotter and some even sweat. Thus beta-agonists increase heat production in mitochondria, and also increase your basal metabolic rate. Meanwhile your appetite becomes lower, which is quite important. Even after tremendous dose of beta-2 receptor stimulants, the feeling of hunger is rather rare occasion.

Beta-Agonists are considered to be anabolic (actually “anti-catabolic” would be more correct). This is due to initiation of a hormonal cascade that activates cAMP (cyclic-Adenosine Monophosphate). In its turn cAMP activates calpistatin, which inhibits calpain. Meanwhile, one of the functions of Calpain is degradation of proteins in skeletal muscles. Therefore, we can see that stimulation of beta-2 receptors leads to increase of energy expenditure, mainly at the cost of fat breakdown. Besides, there is an anti-catabolic effect.

Albuterol doesn’t differ from Clenbuterol in its ability to burn fat, causing fat loss both in normal and obese men. But as for athletic purposes (e.g. strength gains) it outperforms Clen. There was a medical study in which two groups of subjects performed 9 weeks of isokinetic knee extentions. Predictably, the group taking Albuterol had better strength gains than non-Albuterol group. By taking Albuterol the strength gains are much better than gains from Clen. Besides, muscular improvements will be notable within first weeks of its using.

Albuterol has definite anabolic effect and we can’t explain it as intensified anti-catabolic activity. There is a strong evidence that Albuterol releases cAMP. In its turn, cAMP mediates secretion of catecholamines by adrenal medulla, and thus produce inhibitory effect on degradation of muscle proteins. But it is also well known that norepinephrine can increase the rate of protein synthesis in oxidative muscles. Therefore cAMP production indirectly leads to anabolic effect.

There can be another explanation of anabolic effect from stimulation of beta-2 receptors – by lowering levels of interleukin-6. But it’s a long story. It seems that most beta agonists possess ability of temporarily increasing strength. But Albuterol is the most described substance in medical literature to produce the increase of muscle size, strength and indurance. The main disadvantage of Clenbuterol , when compared to Albuterol , is in inhibition of action potential in skeletal muscles, which is not inherent to Beta-2 stimulants.

You can take Albuterol during a cycle to improve your lipid profile (cholesterol) or during PCT to get your cholesterol back under control. Albuterol considerably benefits you by lowering total cholesterol, especially LDL (bad one), and at the same time increasing HDL (good one).

You can get best results by taking 4 mg once a day, but some athletes take up to 4-8 mgs 3 times a day. Some people may think that 24mg is too much, but it depends on the organism. Most professional bodybuilders do 4mg of Albuterol 3 times a day. Half of that dose can suit for women. Due to its unique properties this substance is going to be very popular soon.

The usual dosage for adults and children (older than 12) is 2 – 4 mg taken 3 – 4 times per day. On your doctor’s recommendation you can increase the dose up to a maximum of 32 mg a day, divided into 4 portions.