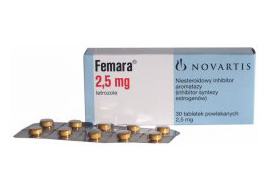 Femara (Letrozole) is an oral aromatase inhibitor of third generation. Originally its mission was to treat breast cancer in women. The thing is that many forms of cancer in women are estrogen dependent. Thus, by blocking aromatase Femara can reduce estrogen production and accordingly suppress development of cancer.

Initially scientists expected this effect from Nolvadex, nevertheless this substance can inhibit only the action of estrogen, but not its production. Meanwhile Femara is extremely efficient in this field. The clinical studies showed that only one tablet (2.5 mg) can reduce the levels of estrogen by more than 80 %.

Due to its ability to dramatically reduce estrogen levels, Femara is only for postclimacteric women, whose desease passed through Nolvadex treatment. Hot flushes and hair loss is common side-effect with it, so there is no doubt that it will be much worse in premenopausal women.

As to the bodybuilding, Femara can be very helpful for male athletes using steroids. Before this time, such substances like Nolvadex and Proviron were used to fight the excess of estrogen. They were rather effective especially in combinations, but Femara exelled them both. A single clinical dose (1 tab) is enough for excellent results (there are reports that even ¼ tablet daily does the job).

Even if you use powerful steroids which are prone to aromatization (Dianabol or testosterone) Femara can quickly stop estrogen related side-effects (gynecomastia and water retention). You can get even greater results in combination with Propecia (finasteride). In this case one drug stops estrogen conversion and the other blocks 5-alpha reductase, thus reducing side-effects to negligible level.

So, by using this combination you can get incredible muscle gain with strong androgenic substances (testosterones), which become as tolerable as nandrolone. The quality of your muscles becomes better and your appearance will be harder when you block water retention.

Though Femara is rather costly for everyday usage it can be much more effective against side-effects of heavy androgenic substances than Nolvadex and Proviron. Thus it makes your cycle much safer.

As the number of Femara producers gradually increases we can expect reduction of its price in future. Besides, liquid version of Femara with formulation “for research” is now available on the black market.