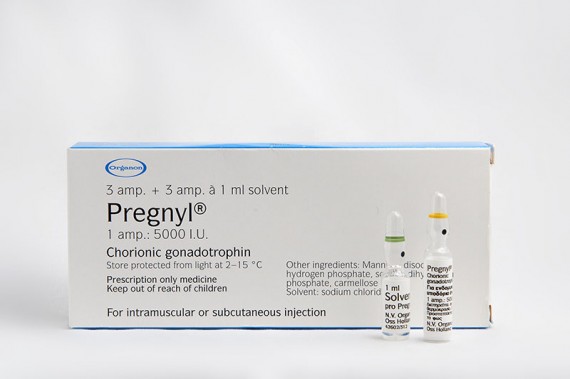 HCG is not an anabolic/androgenic steroid but a natural protein hormone which develops in the placenta of a pregnant woman. HCG is formed in the placenta immediately after nidation. It has luteinizing characteristics since it is quite similar to the luteinizing hormone LH in the anterior pituitary gland.During the first 6-8 weeks of a pregnancy the formed HCG allows for continued production of estrogens and gestagens in the yellow bodies (corpi luteum). Later on, the placenta itself produces these two hormones.

HCG is manufactured from the urine of pregnant women since it is exereted in unchanged form from the blood via the woman`s urine, passing through the kidneys. The commercially available HCG is sold as a dry substance and can be used both in men and women. In women injectable HCG allows for owlation since it influences the last stages of the development of the ovum, thus stimulating ovulation. It also helps produce estrogens and yellow bodies. The fact that exogenous HCG has characteristics almost identical to those of the luteinizing hormone (LH) which, as mentioned, is produced in the hypophysis, makes HCG so very interesting for athletes. In a man the luteinizing hormone stimulates the Leydig`s cells in the testes; this in turn stimulates production of androgenic hormones (testosterone). For this reason athletes use injectable HCG to increase the testosterone production. HCG is often used in combination with anabolic/androgenic steroids during or after treatment. As mentioned, oral and injectable steroids cause a negative feedback after a certain level and duration of usage. A signal is sent to the hypothalamohypophysial testicular axis since the steroids give the hypothalamus an incorrect signal. The hypothalamus, in turn, signals the hypophysis to reduce or stop the production of FSH (follicle stimulating hormone) and of LH. Thus, the testosterone production decreases since the testosterone-producing Leydig`s cells in the testes, due to decreased LH, are no longer sufficiently stimulated. Since the body usually needs a certain amount of time to get its testosterone production going again, the athlete, after discontinuing steroid compounds, experiences a difficult transition phase which often goes hand in hand with a considerable loss in both strength and muscle mass. Administering HCG directly after steroid treatment helps to reduce this condition because HCG increases the testosterone production in the testes very quickly and reliably. In the event of testicular atrophy caused by megadoses and very long periods of usage, HCG also helps to quickly bring the testes back to their original condition (size). Since occasional injections of HCG during steroid intake can avoid a testicular atrophy, many athletes use HCG for two to three weeks in the middle of their steroid treatment. It is often observed that during this time the athlete makes his best progress with respect to gains in both strength and muscle mass. The reasons for this is clear. On the one hand, by taking HCG the athlete`s own testosterone level immediately jumps up and, on the other hand, a large concentration of anabolic substances in the blood is induced by the steroids. Many bodybuilders, powerlifters, and weightlifters report a lower sex drive at the end of a difficult workout cycle, immediately before or after a competition, and especially toward the end of a steroid treatment. Athletes who have often taken steroids in the past usually accept this fact since they know that it is a temporary condition. Those, however who are on the juice all year round, who might suffer psychological consequences or who would perhaps risk the breakup of a relationship because of this should consider this drawback when taking HCG in regular intervals. A reduced libido and spermatogenesis due to steroids in most cases, can be successfully cured by treatment with HCG.

Most athletes, however, use HCG at the end of a treatment in order to avoid a “crash,” that is, to achieve the best possible transition into “natural training.” A precondition, however, is that the steroid intake or dosage be reduced slowly and evenly before taking HCG. Although HCG causes a quick and significant increase of the endogenic plasmatestosterone level, unfortunately it is not a perfect remedy to prevent the loss of strength and mass at the end of a steroid treatment. The athlete will only experience a delayed re-adjustment, as has often been observed. Although HCG does stimulate endogenous testosterone production, it does not help in reestablishing the normal hypothalamic/pituitary testicular axis. The hypothalamus and pituitary are still in a refractory state after prolonged steroid usage, and remain this way while HCG is being used, because the endogenous testosterone

produced as a result of the exogenous HCG represses the endogenous LH production. Once the HCG is discontinued, the athlete must still go through a re-adjustment period. This is merely delayed by the HCG use. For this reason experienced athletes often take Clomid and Clenbuterol following HCG intake or they immediately begin another steroid treatment. Some take HCG merely to get off the “steroids” for at least two to three weeks. Many bodybuilders, unfortunately, are still of the opinion that HCG helps them become harder while preparing for a completion by breaking down subcutaneous fat so that indentations and vascularity are better exposed. The HCG package insert states clearly that HCG has no known effect of fat mobilization, appetite or sense of hunger, or body fat distribution. HCG has not been demonstrated to be effective adjunctive therapy in the treatment of obesity, it does not increase fat losses beyond that resulting from caloric restriction.

Athlete should iniect one HCG ampule (5000 I.U.) every 5 days. Since the testosterone level, as explained, remains considerably elevated for several days, it is unnecessary to inject HCG more than once every 5 days. The relative dose is at the discretion of the athlete and should be determined based on the duration of his previous steroid intake and on the strength of the various steroid compounds. Athletes who take steroids for more than three months and athletes who use primarily the highly androgenic steroids such as Anadrol, Sustanon , Cypionate, Dianabol (D-bol), etc. should take a relatively high dosage. The effective dosage for athletes is usually 2000-5000 I.U. per injection and should-as already mentioned-be injected every 5 days. HCG should only be taken for a 4 weeks maximum. If HCG is taken by male athletes over many weeks and in high dosages, it is possible that the testes will respond poorly to a later HCG intake and a release of the body`s own LH. This could result in a permanent inadequate gonadal function. Cycles on the HCG should be kept down to around 3 weeks at a time with an off cycle of at least a month in between. For example, one might use the HCG for 2 or 3 weeks in the middle of a cycle, and for 2 or 3 weeks at the end of a cycle. It has been speculated that the prolonged use of HCG could permanently, repress the body`s own production of gonadotropins. This is why short cycles are the best way to go.

HCG can in part cause side effects similar to those of injectable testosterone. A higher testosterone production also goes hand in hand with an elevated estrogen level which could result in gynecomastia. This could manifest itself in a temporary growth of breasts or reinforce already existing breast growth in men. Farsighted athletes thus combine HCG with an antiestrogen. Male

athletes also report more frequent erections and an inereased sexual desire. In high doses it can cause acne vulgaris and the storing of minerals and water. The last point must especially be observed since the water retention which is possible through the use of HCG could give the muscle system a puffy and watery appearance. Athletes who have already increased their endogenous testosterone level by taking Clomid and intend subsequently to take HCG could experience considerable water retention and distinct feminization symptoms (gynecomastia, tendency toward fat deposits on the hips). This is due to the fact that high testosterone leads to a high conversion rate to estrogens. In very young athletes HCG, like anabolic steroids, can cause an early stunting of growth since it prematurely closes the epiphysial growth plates. Mood swings and high blood pressure can also be attributed to the intake of HCG. HCG is also suitable as “over bridge” doping before a competition with doping controls. HCG`s form of administration is also unusual. The substance choriongonadotropin is a white powdery freeze-dried substance which is usually used as a compress. Based on the low structural stability of this compress it can easily fall apart, thus giving the impression of a reduced volume. This is, however, insignificant since there is neither a loss in effect nor a loss of substance. Each package, for each HCG ampule, includes another ampule with an injection solution containing isotonic sodium chloride. This liquid, after both ampules have been opened in a sterile manner, is injected into the HCG ampule and mixed with the dried substance. The solution is then ready for use and should be injected intramuscularly. If only part of the substance is injected the residual solution should be stored in the refrigerator. It is not necessary to store the unmixed HCG in the refrigerator; however, it should be kept out of light and below a temperature of 25° C. HCG is a relatively expensive compound. Pregnyl costs approx.$36 -45 for 3 ampules of 5000 I.U. each and the relative solution ampules. The other compounds have a similar price and are $12 -15 for 5000 I.U. The 5000 I.U. ampules are the most economic and, in our opinion, also the most sensible for bodybuilders, powerlifters and weightlifters. There are currently only a few fakes of HCG. Since the dry substance of HCG is somewhat similar to the dry substance of Somatropin often “cheap” HCG is sold as “expensive” HGH on the black market.