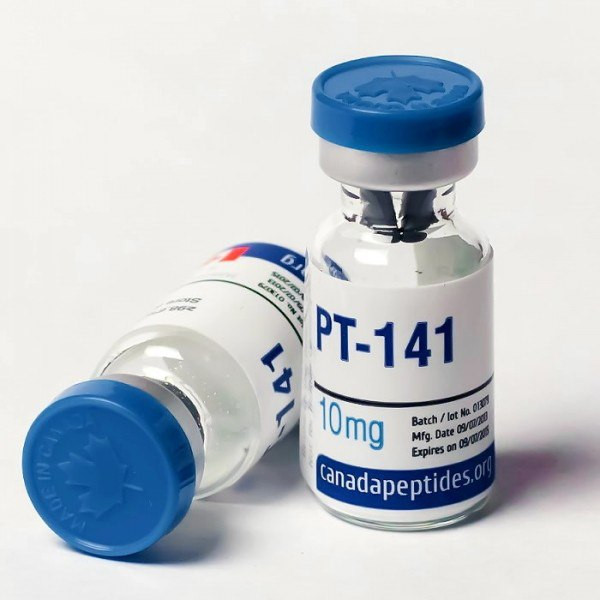 10 words or less: Equal opportunity libido drug for significantly enhanced sexual encounters
Bremelanotide (PT-141) is a medication for use in treating sexual dysfunction in men (erectile dysfunction or impotence) as well as sexual dysfunction in women (sexual arousal disorder). Unlike Viagra and other related medications, it does not act upon the vascular system, but directly increases sexual desire. Originally, the peptide Melanotan II that bremelanotide was developed from was tested as a sunless tanning agent. In initial testing, Melanotan II did induce tanning but additionally caused sexual arousal and spontaneous erections as unexpected side effects in eight out of the ten original male volunteer test subjects. In clinical studies, bremelanotide has been shown to be effective in treating male sexual and erectile dysfunction as well as female sexual dysfunction.

Bremelanotide is a cyclic hepta-peptide lactam analog of alpha-melanocyte-stimulating hormone (alpha-MSH) that activates the melanocortin receptors MC3-R and MC4-R in the central nervous system. It has the amino acid sequence Ac-Nle-cyclo[Asp-His-D-Phe-Arg-Trp-Lys]-OH or cyclo-[Nle4, Asp5, D-Phe7, Lys10]alpha-MSH-(4-10). PT-141 is a metabolite of Melanotan II that lacks the C-terminal amide function. Its molecular formula is C50H68N14O10 with a molecular weight of 1025.2.

How do I use this peptide?

10 words or less: Inject peptide four hours before game time, plan accordingly
PT-141 is most often administered as a sub-q injection, like insulin. Subcutaneous injects are the most efficient, cost effective route. Users report success with doses in the .5mg-2mg range. In this fashion, one 10mg sample of PT-141 will yield ~5-20