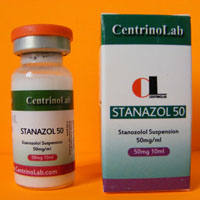 By Bill Roberts – Winstrol Depot (stanozolol) is for most users not a staple drug and not the foundation of any program, but may be included as an extra element.

In a few cases, it is used alone. Winstrol as a sole androgen is a non-optimal choice if maximal mass gains are desired, but can be appropriate where mass per se is not needed, but a hard and lean appearance or athletic speed is required.

It can be added to other steroids for the purpose of improved fat loss, and it may add an increment to strength gains. However, if the rest of the stack is already a highly effective combination, any effect of added Winstrol is relatively subtle. This being the case, since it is a fairly expensive drug I have generally left it as optional when planning programs with athletes.

On the other hand, if a program is otherwise rather mild – for example, if 500 mg/week testosterone were the only other drug used – then the addition of Winstrol shows clear and very worthwhile benefits.

One obvious difference between Winstrol Depot and other injectables is that it is not esterified, being provided as aqueous suspension. (It should not be called water-soluble: virtually none of it is dissolved in the water.) This means that it does not have a classical half-life, where at time x the level is ½ the starting level, at time 2 x the level is ¼, at time 3 x the level is 1/8, etc. Instead, the microcrystals slowly dissolve, and when they have all dissolved levels of the drug then fall very rapidly.

Another effect of being provided in this manner is that Winstrol Depot may yield a quite painful injection if administered into the calf. Other muscles commonly used for injection generally tolerate the preparation well, however.

There is veterinary evidence that drug levels are fairly stable for about a week after administration. In practice, every day use or every other day use is convenient, as 50 mg/day or 50-100 mg every other day are common doses, and the drug is most conveniently administered intramuscularly 1 ml at a time with an insulin syringe.

There are no particular noticeable added side effects from use at 100 mg/day, but I am unsure as to whether there is any further benefit compared to 50 mg/day usage. I think it likely that when Winstrol is only part of a stack which in itself would be reasonably complete, amounts added beyond 50 mg/day add little to nothing further. But when used alone or with rather small amounts of other anabolic steroids, there may well be some further improvement at the higher dose.

Winstrol is a particularly unsuitable drug for women for physique enhancement. In some cases, virilization problems have occurred with oral Winstrol at only 2 mg/day. Thus, it cannot be assumed that even a single tab per day is necessarily safe for all women concerned about maintaining their natural voice, avoiding hirsutism, etc. Injectable Winstrol is an even poorer choice for women than the oral.

There is concern that stanozolol may be more prone to increasing brittleness of tendons than some other anabolic steroids. This does not seem a practical problem in bodybuilding for occasional use – that is to say, being used only some fraction of the weeks of a year – but is probably good reason to not employ the drug chronically.

Stanozolol does not aromatize; that is to say, there is no conversion to estrogen. It also is not affected by the 5alpha-reducatase enzyme found in the scalp and prostate, and so unlike testosterone it is not converted there to a more potent androgen. While some call it a DHT derivative, this does not have any biochemical reality to it as it is not potentiated in the skin or prostate, and additionally, unlike DHT, it cannot be converted to 5alpha-androstanediol.

Being 17-alkylated in both the oral or injectable forms, Winstrol has the same liver toxicity issues as any alkylated androgen. Use is best limited to no more than six weeks at a time.

It is, for male users, fairly rated as a mild drug in terms of side effects, provided that duration of use is limited