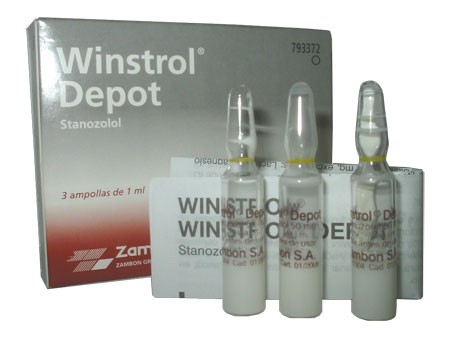 Winstrol Depot is an injectable form of stanozolol. It cannot be a basement of any cycle, but rather an extra element.

In some cases you can use winstrol depot alone, but it is not an optimal choice if you want a maximal mass gain. Nevertheless, it can be appropriate when not mass itself, but lean appearance or athletic speed is preferable.

You can combine winstrol depot with other steroids to improve fat loss and increase strength. However, against the background of highly effective combinations, the effect of added Winstrol is relatively subtle. Thus it stays an optional drug when planning programs with athletes. On the other hand, the addition of Winstrol can show very good results if a program is quite moderate. For example, when 500 mg/week testosterone is the only drug used.

The molecule of Stanozolol is not esterified and it goes in aqueous suspension, which differ it from other injectables. One cannot call it water-soluble, as virtually none of it is dissolved in the water. This means that winstrol depot does not have a classical half-life. Instead, the microcrystals dissolve slowly, and the levels of the drug fall very rapidly when they dissolve completely.

After administration the levels of winstrol depot are stable for about a week. In practice, common doses are 50 mg/day or 50-100 mg every other day. It is very convenient when you take it intramuscularly 1 ml at a time with an insulin syringe.

Side effects and Toxicity

There are no noticeable side effects from the dosage of 100 mg/day. But sometimes it is unclear if there is any further benefit compared to 50 mg/day usage. Generally, when you use winstrol depot as a part of steroid combination, the amount beyond 50 mg/day add little to nothing further. But when you use it alone or with rather small amounts of other steroids, there may be some further improvement at the higher dose.

Winstrol depot is unsuitable drug for women. It can cause virilization problems at only 2 mg/day of oral administration. Thus even a single tab per day is not safe for women concerned about virilization. Injectable Winstrol provides even more powerful effect on women than the oral one.

There is concern that stanozolol may increase tendon brittleness to a greater extent than some other anabolic steroids. This is not a practical problem in case of occasional use. That is to say, if you use it only some fraction of the weeks of a year. But surely it’s better to avoid using winstrol depot chronically.

Aromatase does not convert winstrol depot into estrogen, unlike testosterone. Besides, it is not affected by 5alpha-reducatase enzyme found in the scalp and prostate. Unlike DHT, Stanozolol does not transform into 5alpha-androstanediol.

It is 17-alkylated steroid in both the oral and injectable forms. Thus it has the same liver toxicity issues as any alkylated androgens. So, the optimal period of usage is no more than six weeks at a time.

Winstrol depot is a mild drug in terms of side effects, if you use it for a short time. For male users mostly