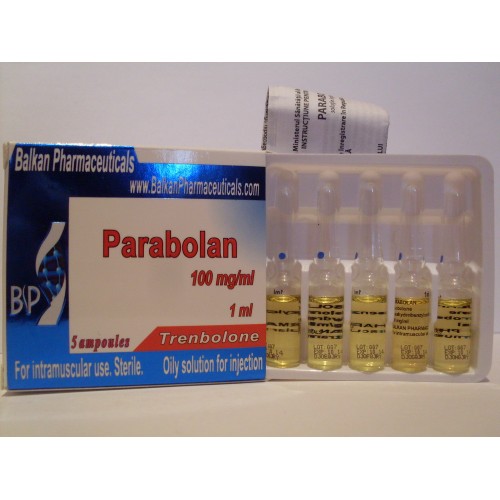 Parabolan (or Trenbolone Hexahydrobenzylcarbonate) is an altered Nandrolone molecule with additional double bonds. This makes it more resistant to aromatase.

The ratio of fat to water solubility greatly affect the half-life of a steroid ester. The longer the chain of an ester, the higher this ratio, and the longer the half-life. In this aspect parabolan is close to enanthate ester, and its half-life is about a week.
Parabolan is an extremely potent AAS, which is three times as powerfull as testosterone esters. Some also think that it is a powerful fat burner too. But there is no evidence in scientific literature about that.

Some athlets usually associate Parabolan with Finaject. Also known as Fina – a fast acting veterinary steroid that was very popular during the 1980`s. Is differs from Finaject as it contains a more suitable for human use ester. Also it remains active for more than two weeks.

It has the same properties as trenbolone acetate, but with longer half-life. If we compare the two substances we will see that 76 mg of cyclohexylmethylcarbonate will be equal to 58 mg of trenbolone acetate. Acetate is lighter, thus with higher percentage of target molecule (trenbolone) in its weight. Though Finaject is no longer available, some bodybuilders replace it with Finaplix, which is also trenbolone acetate.

Parabolan is a very powerful anabolic, which perfectly suits for fast gains of strength and muscle mass. It provides impressive results in a quite short period of time. By anabolic effect you can compare it with such bulking substances as testosterone or Dianabol. But unlike these compounds, it has important advantage – it doesn’t transform into estrogen. Thus taking Parabolan we don’t have to worry about estrogen related side effects (e.g. gynecomastia). Accordingly, there is no need to take anti-estrogens after the cycle (if trenbolone was the only steroid in a cycle). The absence of water retention makes the gained mass look hard and sharply defined, if the fat level is low.

High androgen levels in the absence of estrogen excess, may also be the reason of fat burning. This feature of parabolan is advantageous. You can get a hard and ripped physique without exhausting dieting. This makes it most desired pre-contest steroid for competitive bodybuilders. Though it’s no longer produced, its substitutes are available. Including veterinary trenbolone acetate, Halotestin, Proviron and Masteron.

Side Effects of Parabolan

As Trenbolone is more powerfull than testosterone, we can expect more prominent androgenic side effects. Among them aggressive behavior, acne, hair loss etc. Due to this androgenic features we do not recommend it for women avoiding virilization.

Symptoms of sexual dysfunction may occur after the course of this drug. Reduce them by combining Parabolan with testosterone. You can also expect the drop of thyroid levels, so one should take T3 to cure it.

Among other side-effects are coughs, insomnia, night sweats and decreased cardiovascular capacity. Despite the rumours one cannot find reports about kidney toxicity in scientific literature. There is plenty of bodybuilders doing 50 mg of Parabolan/day without any kidney problems.

Parabolan is an altered trenbolone, being a close relative to Finaplix. But it has much longer half-life. This means you need less injections.

Parabolan appears a better option than Finaplix as it was specially designed for human use. Since there is no need to prepare it, this fact decreases chances of faulty injection. Due to high price there is a lot of fake Parabolan on the market, usually replaced with a low-dose testosterone propionate. This is where the rumours about Parabolan’s estrogenic side-effects come from, but it’s not true. Its structure is similar to nandrolone and it can influence progesterone receptor. But trenbolone can’t cause such things like gyno (if you take it alone), since it does not transform into estrogen. But it can increase the risks of estrogen related side-effects when you combined it with aromatizable compounds. For more information on Trenbolone see Finaplix profile.

Parabolan Combinations and Use:

Despite exaggerated concerns about kidney toxicity, Parabolan is a comparatively safe steroid. It is “all in one” and userfriendly steroid, which makes it outstanding:

The only negative feature – it is not that cheap. This increases risks of purchasing a fake product.

Despite all above said some bodybuilders combine it with such steroids as nandrolone (bulking), methenolone and boldenone (cutting). You can combined it with all forms of testosterone, especially with testosterone propionate. It provides rather good results during a cutting cycle.

Trenbolone surpasses Winstrol, Masteron, Proviron in strength. So, it is better to up the dose than to combine it with these steroids. You can get great results by stacking it with oxymetholone or methandienone. Since both oxymetholone and trenbolone are progestagenic, take Nolva and probably add winstrol to reduce potential gynecomastia. This is not necessary if you use trenbolone alone.

As Parabolan is rather powerfull steroid, there is no need to combine it with others. It’s not aromatizable and thus do not cause estrogen related problems when you take it alone. But if you combine it with aromatizable compound it may up the risks of gyno. So, adding Nolvadex or Winstrol is necessary in this case. Taking HCG from the second week of a cycle would be useful to keep more gains and prevent testicular shrinkage.