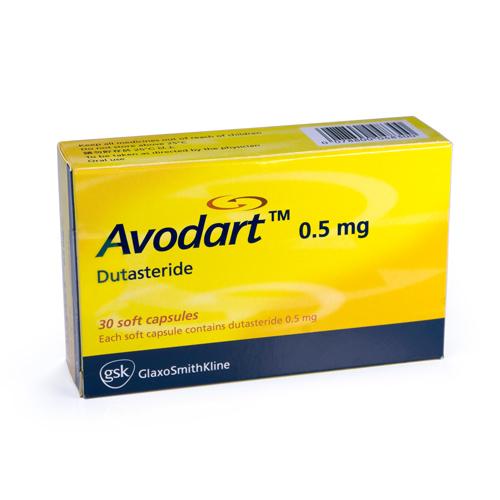 Avodart has FDA approval for treating benign prostatic hyperplasia (BPH) in men. It is also effective in treating the hair loss of male type (top and mid-scalp area). Dutasteride chemically resembles Finasteride, the active agent of Propecia. It comes in 0.5 mg gelatin capsules.

How does it work?

In different studies researchers have discovered that high level of dihydrotestosterone (DHT) is common both in men suffering from benign prostatic hyperplasia (BPH), and in men with hair loss of male type. There is an enzyme called 5-alpha reductase which converts testosterone into DHT. Thus the men suffering from baldness and prostatic hyperplasia have higher levels of 5-alpha-reductase than those who do not have these symptoms.

The therapeutic action of Dutasteride is in inhibition of 5-alpha-reductase, thus preventing DHT formation. Therefore Avodart blocks the main element in both BPH and in hair loss development.

DHT belongs to male hormones. It plays a key role in formation of male genitals in foetus.

However, in adults DHT causes:

How does Avodart differ from Propecia?

Both substances act in similar way. Nevertheless, Dutasteride inhibits two types of 5-alpha-reductase, meanwhile Propecia (Finasteride) only one. In two weeks Avodart reduces the level of DHT by 90%, therefore it is more powerful remedy against BPH and hair loss than Finasteride.

About 3000 men with benign prostatic hyperplasia took 0.5 mg Dutasteride. This treatment reduced acute urinary retention by 57%, also it reduced the risk of BPH related surgical intervention by 48% compared with placebo. Besides, Dutasteride is well tolerated.

As for the treating of hair loss, the study showed that in 6 months the number of hairs in 1 inch diameter circle increased by 96 hairs with 0.5 mg Dutasteride a day. Meanwhile the Propecia results were 72 hairs with 5mg Finasteride daily. So the trials show that Dutasteride is at least 30% more effective than Finasteride in hair regrowth.

Avodart satisfies all safety standards and was approved by FDA for benign prostatic hyperplasia treatment; however it is not yet approved for treating alopecia.

Can it cause hair re-growth in all men?

As well as Finasteride, Avodart increases the number of hairs. Nevertheless, the results may differ, and in general to re-grow all the lost hair is impossible. The hair loss of male type occurs gradually, but Avodart can greatly reduce or delay it. Pay attention that Avodart is not yet approved for treating alopecia, it should be considered as “side-effect” of treating BPH.

The studies show that Avodart is well tolerated. The possible side effects are mild and quickly go away. Keep Dutasteride away from women and children. Pregnant women should avoid it due to possible absorption and potential risk to foetus. Men taking Avodart should not donate blood earlier than 6 months after the last dose to prevent transmission of the substance into pregnant woman. If you have a liver problem consult a doctor before taking Avodart.